It started in 1968 with 6 boys. All 11 years of age. They were the San Jose Buddhist Church Betsuin’s first Boy Scouts.

Like all Scout groups, the new organization needed a numerical name. So the group became … Troop 611. Since then, hundreds of boys have participated in the troop, with about 165 of them earning the highest rank of Eagle Scout.

The troop teaches the boys leadership and life skills, from first aid to time management, from cooking to teamwork. They learn to always be prepared, to be resourceful, and to appreciate the outdoors. If there is an activity at the temple, chances are Boy Scouts from Troop 611 are out front or behind the scenes helping out.

“Troop 611 is a big part of my life,” says Aaron Oshidari, one of the current scouts.  “I have made so many friendships, memories, and learned so many new things while being in the troop.”

The troop meets the first three Wednesdays of the month on church facilities, and, from September to April, participate in one hike and/or campout per month, and attend a summer camp.

Troop 611 Scouts also participate in a wide variety of other activities, including the Nikkei Matsuri, the temple’s Obon Festival and Bazaar, and the Oak Hill Memorial Cemetery Clean-up. They also perform community service such as coastal clean-up, Penitencia Creek tree planting and at the Japanese Friendship Garden.

Parents also play an important role supporting the troop, driving their sons to meetings and serving on the parent committee positions that plan activities and oversee the troop finances.

Derek Fujikawa, one of the assistant scoutmasters who himself is an Eagle Scout from Troop 611, says the troop “has meant a lot to me and my family”. His son, Colin, is a second generation Troop 611 Scout, and like his father, earned the rank of Eagle Scout .

“My time as a scout in the troop were some of the most memorable times growing up,” Derek says, “From just hanging out with my friends to camp outs at Yuki Beach, to summer camp, I made lifelong friends and learned valuable life lessons.  As a parent and leader of the troop, I got to see my son and his friends grow up and turn into great young men now off to college.  The troop has given me so much that I am happy to continue on as a leader even after my son has aged out.”

Derek is not alone. A number of fathers have continued to participate as adult leaders with the troop years after their sons have graduated out.

Aaron says the adults and boys are a tight-knit group, but at the same time welcoming to all newcomers.

“The troop has also taught me how to be a leader,” Aaron says. “Now being one of the older scouts, I have to step up and fulfill roles I was looking up to only a year ago, which has been a great learning experience not only for me, but for the younger scouts to see someone only a year older than them lead an entire troop.”

Like Derek, Aaron is also looking to the future of Troop 611.

Arron says: “The troop has helped me learn so many new things that I would never have even thought about had I not joined, and I am hoping that it will provide a fun and educational experience to future scouts as well as existing ones.”

The Betsuin looks forward that future – and to the possibility of a third generation member of Troop 611.

Guidelines for Board of Review 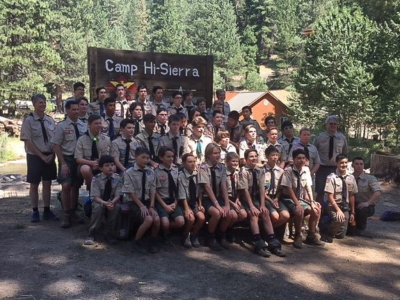